I am happy to present you another awesome band from Italy, Congiura. Band consists of Stefano on vocals, Fabrizio and Federico on guitar, Michele on bass and Stefano behind the drums. Band is part of Sliptrick Records and back in April, 2015 released their debut album “iBlood.” Playing a melodic death metal music, Congiura’s new album is a sweet and heavy treat. This eight track record starts with “Course Of redemption” which, in my opinion, presents the band in full aspect. Not to mention, it is also my favorite song. It features a nice balance of screaming and clean vocals, showing Stefano Lorenzetti how good he is at mixing the two together. What was once really bothering me, I now really enjoy in some growls with some clean stuff. For as long as clean vocals are still a bit on the dark, deep and doom-ish side. A mix of growls with a pure clean singing is a no, no for me. Congiura knows exactly how to bring out pure heaviness.
Being influenced by bands like Dark Tranquillity, In Flames, Katatonia and others, you can find some similarities to other bands in “iBlood.” At the moment my memory is not working properly so unfortunately I can not be of any good use, naming exact songs which are similar to some of the Congiura’s songs.
Do not bother yourself with similarities, the music is killer and you can stream the whole “iBlood” on Soundcloud.
While tuning in this awesome record, find out a little more about the band and what they are up to in the short interview below.

1. Who are you, where do you come form and who are band members?
We are Congiura, a melodic/death metal band from L’Aquila (centre of Italy). Our staff is: Stefano Lorenzetti (vocals), Fabrizio Tartaglini (guitar), Federico Serio (guitars), Michele Mastracci (bass guitar) and Stefano Lepidi (drums).

2. How long are you together and how did you meet and come up with the idea about creating a band?
We met about three years ago in a pub, in L’Aquila. All of other components, except Stefano, were developing idea to form a melodic/death metal band but they needed a singer to complete the staff. He joined and we started creating our first work, “iBlood.”

5. Tell us about your next shows and why we should be there.
We have just finished our “iBlood” release tour around Italy and so we’re founding new dates to spread our work. As regard our live (shows), you should come for many reasons: Explosion, Good Music and Good People!

6. Where can we find more about Congiura?
We have a Facebook Profile, moreover you can find us on YouTube, Bandcamp, Spotify, Last Fm and on all digital platforms like iTunes, Google Play or Amazon.

7. Any last words you’d like to add?
I suggest you to follow us on our channels for news and infos on our dates and works. I promise you won’t receive disappointments! 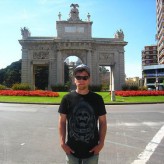